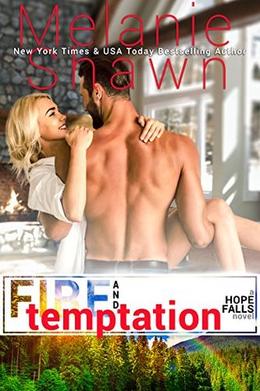 Stand-alone Hope Falls romance, complete with HEA—and plenty of heat and heart along the way!

“Love is a responsibility. Love is a promise. Love is a life sentence.” – Grandpa Doug

Hotshot Evan Bishop was taught at a very early age that love was something to be taken seriously. The thirty-four-year-old alpha firefighter had only loved one woman his entire life, his childhood sweetheart who just told him she was engaged to another man. So when he locks eyes with a blue-eyed, blonde bombshell who has him falling fast at first sight, his instinct is to deny it, ignore it, and resist it.

Actress Shayne Fox was taught at a very early age that love was a luxury that she couldn’t afford. From growing up in foster care to working in Hollywood, the beautiful ingénue's only concern was survival not love. So when she locks eyes with a tall, dark, and sexy stranger who has her wanting something that she never allowed herself to feel, her instinct is to dismiss it, suppress, and avoid it.

He was used to being in control of all things at all times but would he be able to control his heart? She was used to life giving her lemons but would she recognize it when it gave her love?

Sometimes the path of least resistance is the one that is the hardest to take.
more
Amazon Other stores
Bookmark  Rate:

'Fire and Temptation' is tagged as:

Similar books to 'Fire and Temptation'

All books by Melanie Shawn  ❯

Buy 'Fire and Temptation' from the following stores: