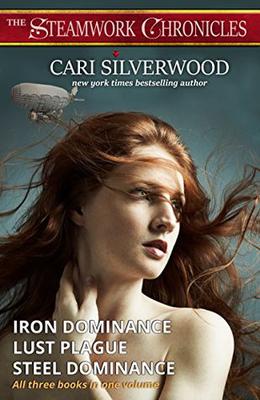 Raised from childhood as an assassin, Claire finds her world knocked off kilter when Theo Kevonis, a rich, ex-Air Corp nobleman, rescues her from an airship crash. Being a soldier of a hostile nation she cannot reveal her identity, but Theo sinks his steely Dom fingers into her heart and soul, showing her the pleasures to be found in surrendering to his touch. Captivated, Claire cannot help but bind herself in lie after lie rather than risk losing the one man who’s ever loved her.

When her loathsome commander returns from the dead, her deceit is uncovered. Somehow, Claire must find a way to win back Theo's trust and destroy the man who threatens them both.

LUST PLAGUE
Saving the world should be easier.

When airship captain Kaysana meets Sten, the last thing she wants is to have mad rough sex with him while restrained by ropes and clamps but fate pencils in their appointment. The lust plague strikes. From her infected crew, zombies arise.

With her ship gone, she must rely on Sten, a human clone, a man who has fought all his life to master himself. She despises his kind and detests Sten’s growing hold on her. Though he never takes no for an answer, surely it’s the plague that makes yes slip from her tongue like melted butter? Or should she blame her own traitorous heart?

Sten and Kaysana unlimber weapons, don goggles, and set a course for the origin of the plague. Yet their victory will be hollow if they cannot also solve the puzzle of their hearts.

STEEL DOMINANCE
A brilliant researcher, Sofia must unravel the ancient puzzle of the Clockwork Warrior or her career will be in tatters. Yet the tomb of the warrior is in the dangerous city of Byzantium, inside the harem of the Emperor. She knew she’d have to pose as a slave—but not that her “owner” would be the incredibly bossy, gorgeous bodyguard she’s been assigned.

A life of military duty has left Dankyo unprepared for Sofia. He’s never met a woman quite like this. She’s smart and beautiful, and she’s something that he’s finding almost irresistible—despite the way she fights against masquerading as his slave, she’s submissive right down to the bottom of her soul. And that’s bringing out every dominant instinct in his body.

But even as he realizes she’s captured his heart, the city explodes into madness. Surviving seems impossible. Can love and a Dom who will never give up overcome sheer bloody-minded evil?
more
Amazon Other stores
Bookmark  Rate:

'The Steamwork Chronicles: Iron Dominance, Lust Plague, Steel Dominance - all three books in one volume' is tagged as:

All books by Cari Silverwood  ❯

Buy 'The Steamwork Chronicles: Iron Dominance, Lust Plague, Steel Dominance - all three books in one volume' from the following stores: