Mine to Keep (Dirty Sexy Space #5) 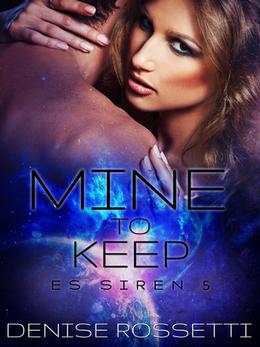 He's all puppy charm, but he smiles like a wolf. Trust him? She'd have to be out of her mind.

All Sandy wanted was some R&R in Sydney before joining the Earth Ship Siren as head of Military Police. What she gets is a night of mystery and pleasure with a man so wickedly fascinating he can't possibly be law-abiding.

For professional con man Peter Stanton, Master Sergeant Alanna Sanderson, with her kick-ass body and cool blue eyes, is the most fun he's ever had. Eight months later, on the Siren, he gets to meet her again, but now he's Prisoner 141, and they're out among the stars, half way to the penal colony on Solitaire.

When a micrometeroid shower strikes the convoy, Sandy and Prisoner 141 are stranded on a stricken ship. Will he pull off the ultimate confidence trick and sacrifice Sandy for his freedom?

If only she could command her heart as easily as she wields her stun gun, because when he betrays her, as he surely must, she's going to have to kill him.
more
Amazon Other stores
Bookmark  Rate:

'Mine to Keep' is tagged as:

Similar books to 'Mine to Keep'

All books by Denise Rossetti  ❯

Buy 'Mine to Keep' from the following stores: