Ours to Embrace (Dirty Sexy Space #7) 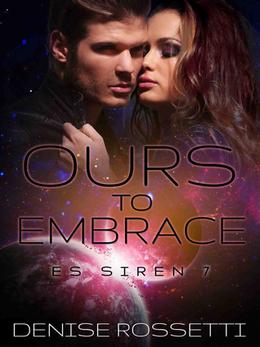 She’s sweet, serious and prim - and she’s messing with his head.

Shuttle pilot Cory Olsen figures he’ll live fast and die young. After all, his is one of the most dangerous jobs on the Earth Ship Siren. Out among the stars, on the long journey to the penal colony on Solitaire, Cory parties hard, laughing and loving, no commitments, nothing serious.

Which would be fine if he could ignore Bella - Prisoner 2844 - and move on to the next pretty face. He can’t work out where he’s going wrong. The woman’s all lush temptation - skin like velvet, mouth like honeysuckle - but Bella’s crankier than his temperamental shuttle craft and twice as mean.

Since Bella’s doing seven years for sedition, she can’t afford entanglements of any kind, not with her old associates and especially not with a handsome, reckless flyboy who makes her laugh at all the wrong moments. With tension on the Siren reaching fever pitch, a ruthless leader emerges from among the convicts. When violence starts to escalate, rebellion seems inevitable.

If Bella’s not careful, she could lose a lot more than her wary heart. She could cost Cory Olsen his life.
more
Amazon Other stores
Bookmark  Rate:

'Ours to Embrace' is tagged as:

Similar books to 'Ours to Embrace'

All books by Denise Rossetti  ❯

Buy 'Ours to Embrace' from the following stores: