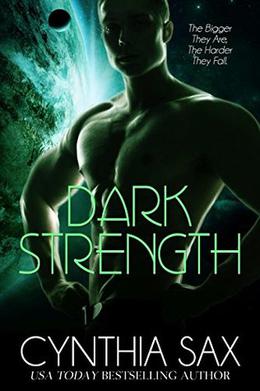 The Bigger They Are, The Harder They Fall.

Balvan, the Refuge’s Gatekeeper, is huge, green, and has a reputation for crushing skulls. He’s a modified humanoid, genetically designed to be the ultimate warrior. One of a kind and considered monstrous by many, he never expects to find his mate, the one female meant for him.

Elyce, snatched from her home half a solar cycle ago, has finally escaped her brutal captors. She arrives at the Refuge barely alive. Only a blood transfusion from the largest male she has ever seen will save her life. But it will also bind her to him forever. Staring up, up, up at him, she wonders why she wants to be free. His gentle touch revives yearnings she thought dead. His lips set her skin ablaze. His massive muscles make her feel safe.

That feeling could be an illusion. Elyce’s captors want their slave back and they won’t stop until they have her. To give his mate her freedom, Balvan might be forced to give up everything he has – his role as the Gatekeeper, Elyce’s love, and his life.

'Dark Strength' is tagged as:

All books by Cynthia Sax  ❯