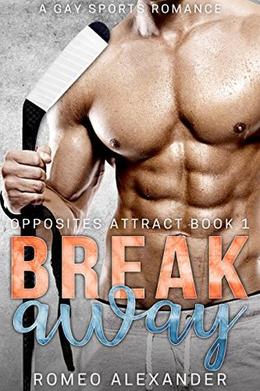 With Sam’s help I’d improve my grades and stay on the team. What neither of us expected is that after studying, there was more I could teach him.

After Jayden’s father died, he felt lost and alone. Nothing made sense to him anymore except for the ice and skating. It was there he could lose himself. With playoffs approaching everything he had worked so hard to achieve was in jeopardy.

With stunning blue eyes shining behind glasses, timid and unsure, Sam and he came from opposite worlds.

Sam’s job was to help Jayden improve himself.

Jayden’s job became to show Sam who he really was.

As much as neither of them ever wanted to admit it, they both needed someone.

Breakaway is a gay love story with characters that come alive off the page and stay with you long after the story has ended. This story may take place on the ice, but its details are steamy and hot.
more
Amazon Other stores
Bookmark  Rate:

'Breakaway: A Gay Sports Romance' is tagged as:

Buy 'Breakaway: A Gay Sports Romance' from the following stores: