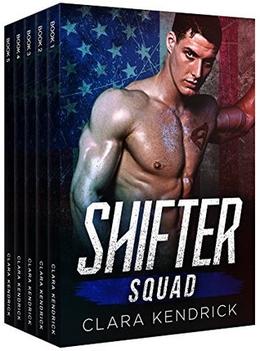 Dive into this sexy five-book series that follows five shifters in their quest for both justice and unexpected romance. Lots of suspense, mystery, and romance. No cliffhangers! Bonus book included.

Book 1: Alex – The Panther
Alex is assigned to work with the gang’s point of contact, a beautiful, clever woman named Tony, who immediately manages to get the dark Alex to open up to her and to himself in a way that nobody ever has before. As Alex and Tony fall for each other, they do their best to take down Sanchez’s operation in the city using Alex’s dark connects, but he doesn’t know that Tony has a dangerous secret, one that could destroy them both before the end of the mission.

Book 2: Nick – The Bear
Nick is a bear shifter on the verge of death the day he is wheeled into Dr. Lilith Cole’s office, his body ravaged by a brutal fight with a roomful of Sanchez’s shifters. Lilith finds that she feels a connection to him before he even wakes up, and though she tries to deny it, she can’t resist how she feels about him the moment he opens his eyes. Awake and alert, Nick is determined to prove to himself and to his commander that he is capable of working the dangerous missions. Lilith finds herself irresistibly drawn to the big shifter, drawn into a conflict so deep that she might just be risking her life as well as her heart.

Book 3: Noah – The Powerful
Noah is a multi-shifter with the ability to change into any animal, but his remarkable, rare ability doesn’t help him when faced with one of Sanchez’s people, a beautiful witch named Fiona. Noah is surprised when Fiona saves him from the fire that he sets to free Lilith Cole from her imprisonment, especially considering the fact that shifters and witches have a blood feud that goes back for centuries. Fiona and Noah hate each other, but they can’t deny their attraction for one another, fierce and powerful in the face of their disdain for one another.

Book 4: Gabriel – The Witch
Gabriel is too powerful. A rare combination of a shifter and witch, he is unable to control either side of his powers. Knowing his potential and how powerful he can be, Liam sends him on a mission to search the addresses that they found to places possibly belonging to Sylvester Sanchez, along with a psychic who has the ability to read the history of places she enters. Sophie is the opposite of Gabriel in every way—excited and charming, nothing like the dark, brooding witch.

Chapter 5: Liam – The Leader
After they finally locate Sylvester Sanchez’s main headquarters in the middle of the Amazon rainforest, Elise insists on going on the mission with them, not convinced that Liam’s personal vendetta against Sanchez won’t get in the way of completing the mission successfully. The closer they get to the compound, the more it becomes obvious that Elise has been hiding something dark and dangerous, something that has the ability to either save the entire squad or watch them burn in front of her.
more
Amazon Other stores
Bookmark  Rate:

'Shifter Squad' is tagged as: