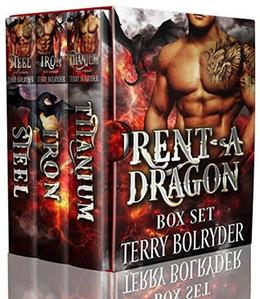 All three of my popular Rent-A-Dragon series, available now in one great boxed set! Enjoy the chaos caused by three Viking dragons who have just awakened and are ready to hire themselves out in the human world for a chance to meet their mates.

Steel
A dragon as a handyman? Ridiculous.
At least Liam Steel thinks so. Sure, he and his crew of newly-awakened metal dragons are experts at building things, but after being sunk at the bottom of a frozen ocean, all they want is to find the mates they were sailing in search of in the first place, and Liam isn't sure how that can happen while he's playing in the dirt. Until he meets his first client, a sweet, curvy, no-nonsense business-woman busy taking care of everyone but herself. His heart screams 'mate', and he's ready to get his hands on more than her yard.

Iron
A Dragon Mechanic? Unheard of.
Unless you're Magnus Ironside, a metal dragon who just awakened in the modern world and happens to be obsessed with cars and their inner workings. Add in the fact that his mate just walked in to hire him to work at her auto shop, and Magnus is one happy dragon. Now he just has to flex his pecs, show her his huge 'axe', and everything will work out, right? Wrong.

Titanium
A dragon contractor? Expensive.
Unless you're the woman Titus Kroll just fell madly in love with. As a decisive, capable, and newly awakened metal dragon, Titus is used to seeing what he wants and going after it. Right now that's Bree Durell, a sweet, curvy woman who needs help with her house badly and can't afford to pay. Still, his heart says she's his mate, and no matter the price, he's ready to serve her every need, whether that's repairing her home, healing her heart, or restoring her trust.
more
Amazon Other stores
Bookmark  Rate:

'Rent-A-Dragon Box Set' is tagged as:

All books by Terry Bolryder  ❯