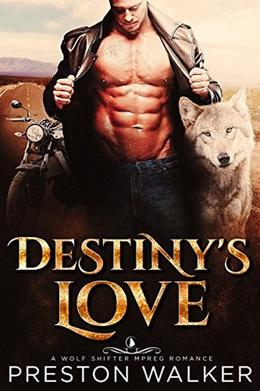 A pack war is brewing…

Alpha Destiny North always gets what he wants. Leader of a motorcycle-riding wolf pack that rules the west end of Pensacola, he’s large, in charge, and stubborn as hell.

Omega Markus is the younger brother of the leader of Lethal Freedom, the other pack in the city. The passionate couple broke up years ago and have been bitter enemies since…but Markus just can’t keep away. Destiny’s confidence, that muscular body of his, his arrogance… it was too good to be true, and now it’s all gone.

When someone starts attacking bikers, both packs blame the other. War is coming... and only ones who can stop it are Destiny and Markus. But at what cost?

'Destiny's Love: A Wolf Shifter Mpreg Romance' is tagged as: