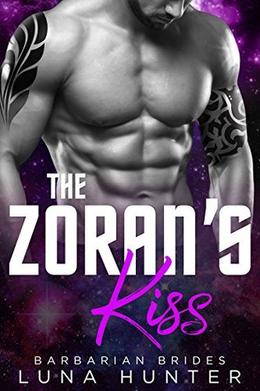 It was supposed to be her big day. After years of studying Piper Bell finally received her coveted scholarship in astrophysics, and she’s very excited to board her first spaceship — and a tad anxious when she meets the twenty other girls who’ll be her bunkmates. The dream turns into a nightmare when horrific, brutal aliens attack the ship, murder the crew and abduct the girls. Just twenty four hours after takeoff, Piper finds herself locked in a cage on a dirty ship, ready to be sold to the highest bidder.

Rescue comes in an unlikely form: Kane. The silver-colored Zoran warrior saves her from the ruthless aliens — but he doesn’t free her. No, the tall, imposing, deadly warrior has other plans for her. Kane has lost all of his memories when he crashed on Vagreon six months ago, and now he works as a mercenary for the Sahr clan as he tries to rebuild his life. They’ve promised to reveal his past to him if he delivers them an untouched human female.

Kane is desperate to learn who he was, but he finds himself inexplicably drawn to the curvy human female. Could she be his fated mate? He tries to fight his attraction, for giving in means throwing his past and his present away, but it grows harder with every hour they spend in each other’s company…

The Zoran’s Kiss is book six in the Barbarian Brides series, but can be read as a standalone. It’s an instalust, fated mates romance featuring a feisty human woman and the proud, stubborn alien warrior who wants to make her his. Happily-Ever-After guaranteed!
more
Amazon Other stores
Bookmark  Rate:

All books by Luna Hunter  ❯