by Katherine Bone, For the Muse Designs 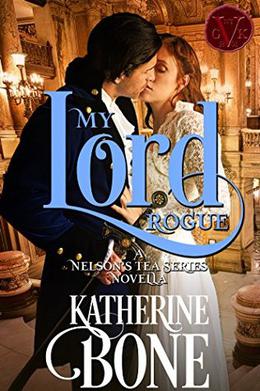 Reissued and edited with new scenes!

Espionage, secrecy, and thwarted assassination attempts. The only thing more dangerous is being in love…

Gillian Chauncey, Baroness Chauncey, is a master of disguise, trained by her expatriated husband, a former French royalist, in the arts of espionage. When a dangerous life or death secret lands in her lap, she’s thrust into a perilous world of ticking clocks and desperation, arrowing her directly into the arms of the man who arranged her marriage.

Lord Simon Danbury is no ordinary nobleman. He’s been tasked by Admiral Nelson to organize an elite group of clandestine first sons willing to sacrifice all to protect England’s shores. When an assassination attempt is made on Nelson, Simon isn’t sure what poses more danger, the enemy or the masterfully seductive Gillian.

Ahoy, me hearties! I got the rights back to my Nelson’s Tea Series in 2017 and have been busy revisiting the characters and writing new scenes just for you. Do you believe in second chances? I sure do! And a second chance is exactly what Simon and Gillian need in My Lord Rogue. If you like Regency stories filled with romance, lords and ladies, intrigue, betrayal, deception, marriages of convenience, action/adventure, spies, espionage, seafaring battles, swashbuckling heroes, and dukes and pirates, find out what happens when two former lovers, now spies, meet up again in 1801. The danger is very real!

What is Nelson’s Tea?

In 1801, Admiral Horatio Nelson returned to England to recover from another bout of malaria. While recuperating from his illness, he was tasked by the Admiralty to organize a way to protect England’s shores from Napoleon. My Lord Rogue is a fast-paced introductory novella to this thrilling series sure to keep you on the edge of your seat. Read how Lord Simon Danbury organizes the clandestine group, code-named Nelson’s Tea.

Admiral Nelson was never without his tea, even during battle. In this fictional series, Nelson could ask for his tea, but mean his mercenary group, first sons from all walks of life, men beyond suspicion, men Nelson could call to action at a moment’s notice. Determined, disciplined, and dedicated men who’d serve the crown with duty and honor, men willing to die to protect England and the ones they love.

'My Lord Rogue: A Nelson's Tea Novella' is tagged as:

Similar books to 'My Lord Rogue: A Nelson's Tea Novella'

Buy 'My Lord Rogue: A Nelson's Tea Novella' from the following stores: