The Things We Cannot Change: A Zombie Apocalypse Love Story 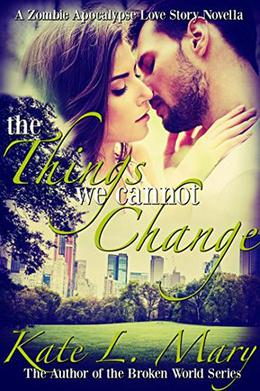 Jade is smack dab in the middle of a personal crisis when a killer virus sweeps the country, only making matters worse. Before she even has a chance to wrap her brain around what’s happening, the world has vanished and everything she knew and loved is gone. Even worse, she’s starting to think she might be the only living person left in New York.

Which probably has a lot to do with how she reacts when she bumps into Trevor in Central Park. What can only be described as a celebration of life is followed by an awkward morning where she realizes she doesn’t even like the only other living person she’s seen in days. And she’s pretty sure he isn’t too thrilled with her either.

But when Jade and Trevor realize that this outbreak is much more than just a killer virus, they suddenly find themselves dependent on one another for survival, and it isn’t long before Jade is forced to forget the things from her past that she cannot change, and instead focus on the things she can change in the here and now.
more
Amazon Other stores
Bookmark  Rate:

'The Things We Cannot Change: A Zombie Apocalypse Love Story' is tagged as:

Similar books to 'The Things We Cannot Change: A Zombie Apocalypse Love Story'

Buy 'The Things We Cannot Change: A Zombie Apocalypse Love Story' from the following stores: