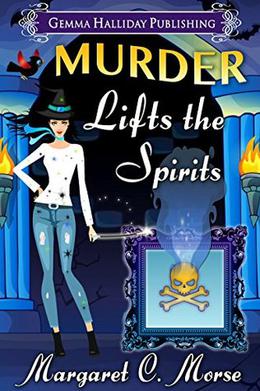 Attorney Petra Rakowtiz thought her courtroom skills were magical... that is until this newbie witch realized what real magic was.

For the past two months Petra has made the Disclaimer Ranch her home, undergoing treatment and training for her fledgling powers. She’s focused on learning to be a good witch—no more accidental arsons. But when a fellow Ranch resident and wizard dies while arguing with Petra, the other program residents accuse her of murder by magic, and Petra must use all of her legal know-how to defend herself!

With a slew of suspects ranging from a convicted killer to a wanna-be Watson making wild accusations, Petra has her hands full. Not to mention the murder victim who returns in ghostly form, demanding that Petra find his killer. The clock is ticking as the other residents become targets and Petra finds herself going toe to toe with a murderer intent on not-so-magically making her disappear...for good!

"Absolutely delightful cozy mystery with solid dose of the paranormal. And oh, the world building! Margaret C. Morse does a marvelous job at introducing us to the challenges—as well as the benefits—of having magical powers. "
—Fresh Fiction

'Murder Lifts the Spirits: a paranormal cozy msytery' is tagged as:

Buy 'Murder Lifts the Spirits: a paranormal cozy msytery' from the following stores: