Memories of a Highlander (Highlanders #2) 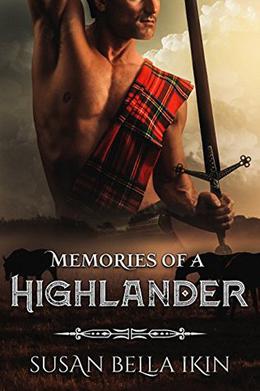 My life was over. I was sure of it. Or at least, life as I knew it, as I could bear it. After being brought back by Liam McGarrow last year, my father had barely let me have a moment alone. Later, it became clear why my father had decided to guard me so closely, Lachlan had returned, and he seemed to be the only person my father was prepared to let me be alone with. Perversely, I did not want to be alone with him, he stared at me in a way which made me uncomfortable.
**
I knew when the words were out of my mouth that I had made a mistake. Lachlan’s eyes had narrowed when I told him I didn’t want him, but when I said he scared me, I had seen the flush run up his face, and his eyes take on a feverish glint. I got really scared then, realising that he was the type of person who enjoyed other people’s fear and pain.
**

Just as I had so often, I found myself riding near the border with McDonnell lands, chiding myself for my foolishness. The air felt oppressive, and I looked up into the summer sky to see dark clouds gathering. My mount whinnied, obviously smelling the storm coming in the air, and I was about to turn back when I saw two horses racing along towards the stream. Even from this distance, I could see that the lead horse carried a woman, her hair had become partially unbound and the red-gold length of it streamed out behind her, and she appeared to be being chased by a man. I watched for a moment longer, not sure if it was a chase or just two young lovers being merry, but something about the man’s carriage did not look right.
**
“Da! What are ye talking about! Donald saved me, he didn’t hurt me!”


Although this book is part of a series, each book is a standalone with no cheating and a guaranteed HEA.
more
Amazon Other stores
Bookmark  Rate:

'Memories of a Highlander' is tagged as:

Similar books to 'Memories of a Highlander'

Buy 'Memories of a Highlander' from the following stores: