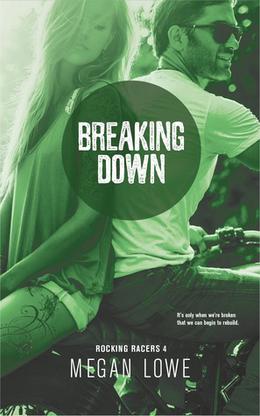 When a hot BMX champion butts head with a woman who could kick his arse, it’s only a matter of time before the gloves are off and the heat is on.

What happens when the unexpected flips your world upside down?

That’s the question Jax Ryan must answer when everything he knows and loves is tipped on its head. Adjusting to his new reality is not easy. Throw in the woman of his dreams, who won’t even give him the time of day, and Jax is out of his element.

Bentley La Roche is tough. She’s a fighter, literally. In her spare time, she can be found with the best MMA fighters on the Gold Coast. But she’s guarded and has no interest in getting involved with anyone, especially Jax Ryan.

But when things go from bad to worse for Jax, Bentley’s walls are no match for her desire to help him. Breaking down is easy. It’s the rebuild that’s hard, but so much fun.
more
Amazon Other stores
Bookmark  Rate:

'Breaking Down' is tagged as:

Similar books to 'Breaking Down'

All books by Megan Lowe  ❯

Buy 'Breaking Down' from the following stores: