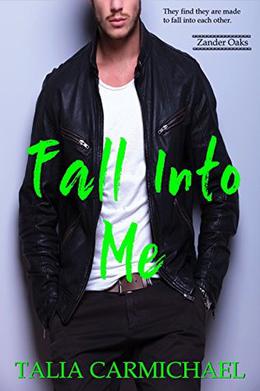 Jaxx Coulter doesn’t like change. He’s used to things a certain way and in it’s place. When a man comes to his ranch and shakes up his orderly world he’s not in the mood to deal with it. But this man doesn’t seem to get he’s not one to mess with. He challenges him and Jaxx is surprised he finds himself drawn to Turner who is unlike anyone he knows.

Turner Black doesn’t follow anyone’s rules. He walked away from a fortune because he refused to be dictated too. Now he’s here on a ranch at the request to help out a friend. Yet when he arrives he finds that he’s not expected and confronted by a man who needs to loosen up. A man who pushes all his buttons. Now it’s time to show Jaxx that sometimes disorder can be a good thing. You just needed to embrace it.

Will Jaxx be able to release his need for control and embrace what Turner has to offer?
more
Amazon Other stores
Bookmark  Rate:

'Fall Into Me' is tagged as:

Similar books to 'Fall Into Me'

Buy 'Fall Into Me' from the following stores: