Love for All Times: The Trilogy: A Highlander Time Travel Collection 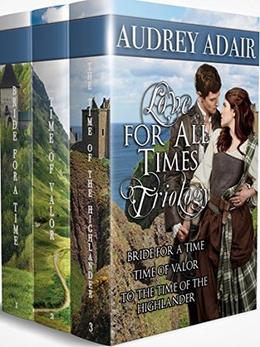 The search to find a place of love and belonging takes an unexpected turn when these men and women find themselves thrust into impossible situations. With all the barriers between them, can they overcome the inconceivable and find love forever, or will it be captured in a brief moment in time?

This trilogy includes three stories, with over 92,000 words of time travel highlander romance.

Bride for a Time

Jaime Abernathy's life has been turned upside-down. She decides to follow her heart to Scotland, the home of her ancestors. Her parents have passed, and she feels called to the place of her roots. While walking in the woods of her ancestral family home, she falls and awakens in the 16th Century, in the arms of Alec McDermont.

Alec is soon to be Laird of the McDermonts. He is to be married to the wretched Alexandra Gillie of a warring clan. He'll do anything to keep the marriage from happening, and when he finds Jaime in the woods, he senses a way out.

Historian Emilia Guthrie is exploring the ruins of a castle when she sees an apparition in the distance. Her curiosity takes her down a path she never thought possible, putting a 16th century Highlander’s life in her hands.

Dougal MacGavin must defeat the Buchanan clan to prove himself as laird. In the midst of a bloody battle, he finds his life in the hands of a woman as strange as she is beautiful.

Emilia is determined to save Dougal’s life, despite the fact he thinks her mad. How can they overcome their own battle of stubborn will and attraction to fight all that threatens to destroy them?

To the Time of the Highlander

When his ex-girlfriend seemingly disappears, Bryan Smith knows something isn’t right. Unable to move on until he puts the past behind him, Bryan sets out to her last known destination of Stonehaven, Scotland. There, his search leads him down a path he would have never thought possible.

Sorcha Singleir has always known her destiny was to marry a man chosen by her father. When she finally meets him, however, she despairs at the life ahead of her, but can’t find a way out without bringing ruin on her clan. Then one night a mysterious but handsome stranger appears in her bedroom, bringing with him more questions than answers.

Bryan wants to help the beautiful, troubled young woman, but can’t seem to find a way to prevent her marriage to another. As much as she knows it can never be, Sorcha can’t help but be drawn to the captivating yet mad foreigner. With all the barriers between them, will they find love forever, or will it be captured in a brief moment in time?

No cheating, no cliffhangers, and guaranteed happily ever afters!
more
Amazon Other stores
Bookmark  Rate:

'Love for All Times: The Trilogy: A Highlander Time Travel Collection' is tagged as:

Similar books to 'Love for All Times: The Trilogy: A Highlander Time Travel Collection'

More books like 'Love for All Times: The Trilogy: A Highlander Time Travel Collection'   ❯

All books by Audrey Adair  ❯

Buy 'Love for All Times: The Trilogy: A Highlander Time Travel Collection' from the following stores: