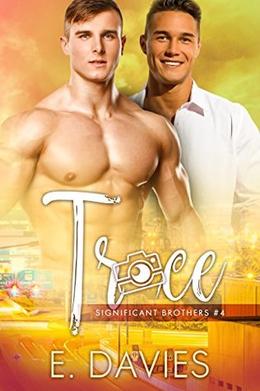 Forensic investigator Dustin Reed stopped believing in fairytale romance in high school. Ever since his best friends scared off his loser ex, he's been a chronically single scrawny geek, afraid of being used. Love blossoms around him, while his family wants him to get hitched to the right class of man. All he can seem to find is hookup app encounters, but Dustin wishes someone would sweep him off his feet for love, too.

After his tour of duty, now-forensic photographer Leo Sanderson is glad to be home. Behind his muscles lies a heart of gold, but school and his new job aren't resonating with him. Nobody has his back anymore, but he's fine on his own. He's never clicked with the women he's dated, but bumping into Dustin in a gay bar is making things fall into place... a little faster than he'd like.

Hooking up while avoiding labels isn't a bad idea: Leo's figuring himself out, Dustin's unwilling to hand over his heart, and they both work together. But Valentine's Day is coming and they haven't been seeing anyone else. In fact, neither of them want to. Every fairytale has to start somewhere; why not the bedroom? Can they get past their insecurities and admit to each other and the world what they really want?

Trace is a standalone gay romance novel with a HEA ending and no cliffhanger. Book #5, Clutch, will be available March 1st!
more
Amazon Other stores
Bookmark  Rate:

'Trace' is tagged as:

Buy 'Trace' from the following stores: