Stolen by the Sea Lord (Lords of Atlantis #4) 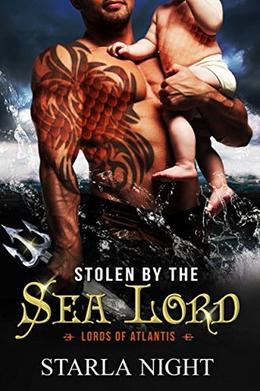 Tattooed mer-shifters are climbing out of the secret depths to claim their soul mates and save their race!

Tormented warlord Elan, once highly respected First Lieutenant of undersea mer city Dragao Azul, lost everything the night his son was born. Unable to protect his fierce human wife from the ancient covenant that forced her to the surface, separated from his precious newborn son, and himself forced into the role of General in a war he does not believe in, he sank into deadly darkness … and escaped. Now carrying secret knowledge that could change the face of the war, he lives only to reunite his family — no matter the cost.

Zara almost died the night she was forced to the surface. Shattered memories are all that remain in her broken heart. Suddenly, Elan stands before her like a mirage. Heart-stopping, mouth-watering, and all hers. And he has returned with her son.

His people will stop at nothing to enforce the ancient covenant, and yet Elan claims Zara has a mysterious, untapped power that can protect them. If she can’t, then not only will their family be ripped apart, but the ancient traditions will win — and the hope for the future of the mer-human partnerships will be lost forever.

Contains steamy mer-shifter love scenes, a warrior who thinks he’s beyond redemption, and a curvy female who’s about to prove him wrong!
more
Amazon Other stores
Bookmark  Rate:

'Stolen by the Sea Lord' is tagged as:

The 'Lords of Atlantis' series

Similar books to 'Stolen by the Sea Lord'

More books like 'Stolen by the Sea Lord'   ❯

Buy 'Stolen by the Sea Lord' from the following stores: