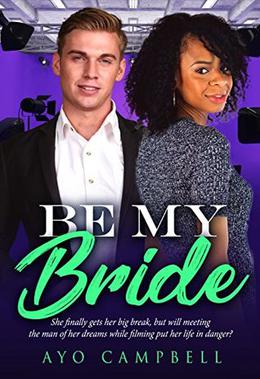 Kelly Lane is a beautiful budding actress with one problem: she has stage fright!

After a series of minor roles, she finally gets her break after being offered a big role in a blockbuster movie!

During filming in the Florida Keys, Kelly meets the executive director Liam Abbott.

Liam is hot, charming, and a total womanizer.

Despite his bad boy persona, Kelly falls hard for him and spends one night of passion with him onboard his luxury schooner!

But drama strikes the filming team when a spy leaks movie secrets and embarrassing photos to the public.

And Kelly is starting to realize that the more she learns about Liam’s past, the more she is flirting with heartbreak.

Can Liam change his playboy ways to gain her trust?

Or will both the film and her love life be a total disaster?

Find out in this fun and sexy romance by Ayo Campbell of BWWM Club.

Suitable for over 18s only due to sizzling hot sex scenes!
more
Amazon Other stores
Bookmark  Rate:

'Be My Bride' is tagged as:

Similar books to 'Be My Bride'

All books by Ayo Campbell  ❯

Buy 'Be My Bride' from the following stores: