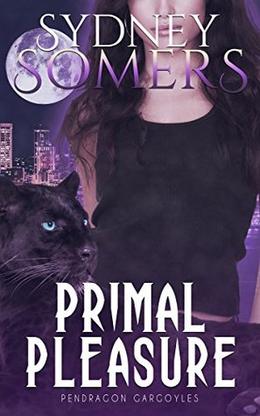 He'll have his revenge--one wicked seduction at a time.

Emma is used to getting dragged into her twin sister’s magical messes, but this time her predicament is more than a minor annoyance. She’s chained to a cat shifter that her sister encased in a curse of stone. Worse, the unfortunate gargoyle’s waking up. And her sister’s not there to take the heat.

After a century suspended in stone, Cian would do anything to get his hands on the sorceress who put him there. Strangely, his dreams of revenge turn into an animal hunger to put his hands all over her—in every delightfully wicked way imaginable.

Never as talented as her sister, Emma doesn’t trust her own magic. But for now she must let Cian believe she’s the culprit in order to strike a bargain: to permanently lift the curse in exchange for his tracking skills to find her missing sister. The longer she is near him, though, the closer she comes to surrendering much more than her body to the brutal warrior.

As their attraction catches fire, Emma dreads what could happen when he learns the truth. If he will sacrifice her to break the spell…or fight for a love that goes beyond animal instinct.

Praise for the Pendragon Gargoyles Series:

“…the entire series a must-read.” – Rabid Reads on Primal Pleasure

“The world that Sydney Somers created is just fantastic. The twists and turns will keep you coming back for more.” – Fictional Candy on Primal Instinct

“Sydney Somers writes love stories with a sexy edge that keeps me coming back for more.” – Fiction Vixen on Primal Pleasure

“Sydney Somers has a great voice. I always enjoy reading her and I definitely recommend this series.” – Smexy Books on Primal Pleasure

“Sydney has created such an interesting world, it’s difficult not to be in awe as you read these books.” – Yummy Men Kickas Chicks on Primal Temptation

'Primal Pleasure' is tagged as: