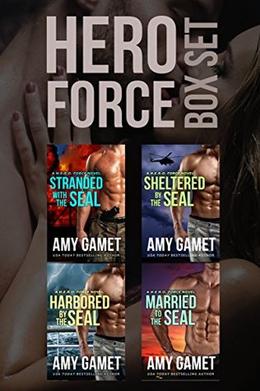 Meet the men of HERO Force, the Hands-on Engagement and Recognizance Operations team.

Book One: Stranded with the SEAL

Love and danger collide on a snowy mountain road...

Navy SEAL Trevor “Hawk” Hawkins is on a mission to avenge his teammate’s death when he crashes into another car during a blizzard. Olivia Grayson was running from her own wedding, but the accident leaves her struggling to remember anything at all. Sparks fly between Trevor and Olivia, but an enemy is quickly closing in on the remote cabin - and the holes in Olivia’s memory might be the biggest danger of all.

Book Two: Sheltered by the SEAL

He owes her two people.
She’s only taking back one.

Jessa McConnell conspires to get pregnant by Jax Andersson, commander of HERO Force and the man she holds responsible for the death of her husband and unborn child. She assumes a new identity to make sure her secret isn’t discovered, but ends up fighting for her life when she inherits a book intended for the other woman.

Book Three: Harbored by the SEAL

This ship is going down.

Navy SEAL playboy Leo “Cowboy” Wilson has done his best to stay away from Charlotte O’Malley, the sister of his HERO Force teammate, Logan. But when Charlotte books herself on a week-long cruise knowing Cowboy’s there on HERO Force business, she’ll get more than the fling she bargained for, with a terrorist cell placing Cowboy and Charlotte firmly in the path of danger.

This is a novella. It’s more than half the length of a full HERO Force book.

Book Four: Married to the SEAL

He was supposed to pretend to love her.
To protect her. To keep her son safe.

He failed at all three.

Matteo goes undercover, pretending to be married to a dignitary's daughter, never expecting the charade to get personal. But it does, just as HERO Force finds the link between the woman and their strongest enemy to-date.

'HERO Force Box Set: Books One - Four' is tagged as:

All books by Amy Gamet  ❯