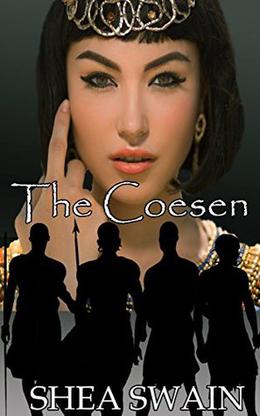 They leave as boys, only to return as something else.

Best friends Arkean, Bode, Gedgi, and Quende set out on a rite of passage determined to return as men and worthy Warriors. On their way home, they encounter something otherworldly. Because of an act of compassion on their part, they are rewarded with unimaginable power. The four’s only thought is to use their new abilities to help and protect their people.

But their homecoming isn’t what they expected.

The Four soon realize that their powers are driving a wedge between them and the people they’ve known all their lives. Most of the villagers are fearful and the King’s advisors are suspicious. When the ruthless Pharaoh hears of their abilities, he decides he wants The Four for his campaign to conquer his enemies.

Journey with The Four and witness their friendship and quest for love as they confront superstition, greed, hate, and jealousy. With them, be forever changed.
more
Amazon Other stores
Bookmark  Rate:

'The Coesen: Origins' is tagged as:

Similar books to 'The Coesen: Origins'

Buy 'The Coesen: Origins' from the following stores: