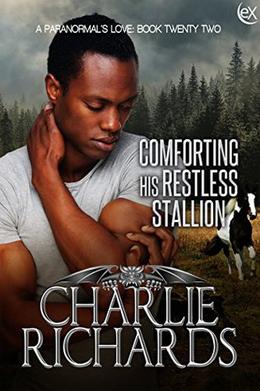 Baron and his friend plan a coup, staged in hopes of a better future, but it all goes horribly wrong. He is caught, and his friend is killed. When Baron refuses to rat out his buddy’s wife and daughter’s location, he’s tortured for his silence. Left hanging in his chains for several days, Baron expects death. Instead, he’s rescued by a stranger who assures him that his friend’s loved ones are well. Baron asks to be taken to them and ends up at the estate of a gargoyle clutch. Baron’s surprise is compounded when Conchlin walks in with his evening meal…and Baron recognizes the small, bright-orange gargoyle as his mate. While Baron wants the man, he doesn’t think he can give Conchlin everything he needs to complete their bond. Before Baron has even had a chance to heal and find out, Conchlin’s past comes back to haunt him, putting their mating in jeopardy. Baron realizes it’s not all about him. Will standing beside Conchlin and supporting him through adversity be enough for them to find their future together?
more
Amazon Other stores
Bookmark  Rate:

'Comforting his Restless Stallion' is tagged as:

The 'A Paranormal's Love' series

Buy 'Comforting his Restless Stallion' from the following stores: