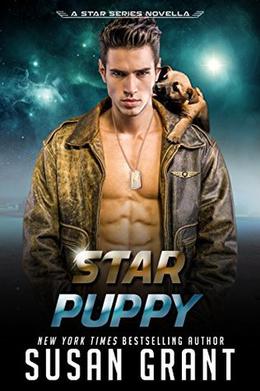 "Pure yumminess and just as well written - and plain out fun!” --Goodreads

Prince Rornn feels fortunate he can pursue his passions both in the air and on the ground. Being third in line for the throne definitely has its advantages – it allowed him to join the Space Forces as a top-gun starfighter pilot. What he doesn’t expect is to find a woman there who not only competes with him – she completes him. They’re already best friends, so why can’t he convince her that they’d be even better as more?

Trysh joined the Space Forces with the secret hope that her absentee father might notice her accomplishments and acknowledge her. At the top of her game as a starfighter pilot, the last thing she needs is a way too charming prince to get in her way. Trysh learned at a young age what happened when a person lost their heart to someone above their social class – it led to heartbreak. But lately Rornn has her wondering if she wouldn’t mind being proved wrong.

Then they rescue a tiny, starving yipwag pup from an alien world. It turns out that “Puppy” is as good at sniffing out terrorists as she is at helping her two clueless humans figure out that they need each other as much as they do her. Now all Rornn’s got to do is convince Trysh that he's nothing like her father and that she's just the right woman for him...before the terrorists discover their furry little companion.

'Star Puppy: a Star Series novella' is tagged as:

All books by Susan Grant  ❯