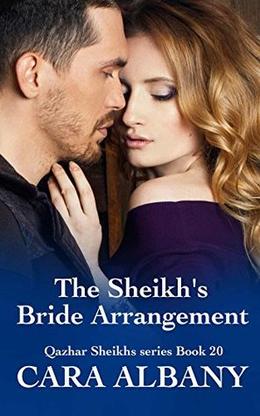 THE SHEIKH AND THE PRINCESS, FORCED INTO A ROYAL WEDDING WHERE ENEMIES BECOME LOVERS

To the shock of unruly outsider, Princess Eliana, a centuries old tradition forces her to consider an arranged marriage to a Qazhar sheikh.

The only way to avoid her fate is to pretend to be the sheikh’s worst enemy. Fortunately that’s simple, because the arrogant, untamed sheikh is so easy to dislike. He might be tempting, but she’s determined to resist him.

Sheikh Kadeem Al Kharif has no intention of going through with the obligation to make the spoiled and stubborn Princess his bride. He is more than happy to show how much he disapproves of the pampered royal, if it means they can both avoid an unwanted marriage.

However, he doesn’t bargain for the irresistible temptations of his royal bride-to-be. Even if they’re not fated to be wed, at least he’ll take her to his bed.

With all the forces of their two worlds against them, can the Princess and the Sheikh find their true destiny?

This is a new full length standalone novel in the Qazhar Sheikhs series.
more
Amazon Other stores
Bookmark  Rate:

'The Sheikh’s Bride Arrangement' is tagged as:

All books by Cara Albany  ❯

Buy 'The Sheikh’s Bride Arrangement' from the following stores: