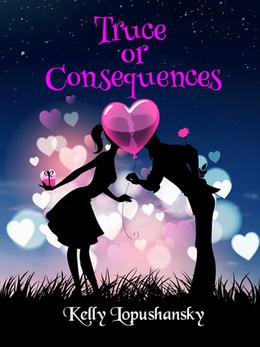 Forge a truce and accept the consequences...

Jillian Braden has been competing with George Crewes, and denying an instant attraction to him, since the first day she started as a manager in the software division at Gardiner D. Associates. Just when it seems their race to the top will have a winner, the company is suddenly floundering for funds. A private investor may be the answer to everyone’s potential employment woes, but he wants demonstrations of what the company can do. Can Jillian’s group save the company alone or should she swallow her pride and join forces with George to try to save them all?

Having focused on the promotion since before Jillian’s arrival, George set aside any possible personal interest in her when it became clear that she was the competition. But when the promotion and even his current job are in jeopardy, he’s forced to see her in a different light, efficient, effective, and perhaps a partner to success. Already convinced that Jillian’s group will likely overshadow, or worse, completely embarrass his group in the upcoming demonstrations to keep the company afloat, George is flabbergasted when Jillian makes him an offer to team up.

Setting aside their differences will be hard enough, but when they start to notice how much they have in common, they unexpectedly find the promotion they both desired might not compare to a possible future together.
more
Amazon Other stores
Bookmark  Rate:

'Truce or Consequences' is tagged as:

Similar books to 'Truce or Consequences'

Buy 'Truce or Consequences' from the following stores: