Mail Order Bride: The Button & Bow Bride (Heroes and Heroines of the West #4) 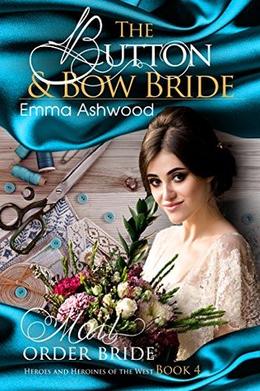 How was young Alice Smith to keep body and soul together as an orphaned seventeen year old girl, in the harsh Chicago winter, charged with the care of her ten year old brother? Excluded from their home in the cash-strapped orphanage, they lived in the basement of a kind benefactor. Alice loved working as a seamstress, and cared deeply for the women she worked alongside, but there had to be a better life out there for her and her brother, James. She would go on the adventure before her to find that life.

World-wise and hard working, Bobby Jones had carved out a fine life for himself on his successful cattle ranch in Nevada. Having pulled himself up by the boot strings as a young boy, leaving New York and then Chicago to mine the goldrush alongside rough and ready men double his age and size, he now farmed alongside his childhood friend, James Carter. But the good life could be made so much better if he had a wife to share all he had with. To this end he advertised in the Matrimonial Times, and held thumbs that divinity would provide.

Anyway you look at it, Alice knew to count her blessings that anyone would be prepared to accept her as a package deal with her younger brother. Although her suitor was all she had hoped, young James was not making adapting to this new life out West easy for her, or indeed her suitor. James had to consider whether a life of being bullied, living in freezing conditions with little sustenance and no scope for betterment back in Chicago would be better than accepting what Nevada had to offer. Fate had brought two people along the same road, to meet at a dusty crossroad, to carve out a destiny. Would fate be kind now that they had found one another?
more
Amazon Other stores
Bookmark  Rate:

'Mail Order Bride: The Button & Bow Bride' is tagged as:

The 'Heroes and Heroines of the West' series