A Mate for the Alphas (Great Plains Shifters #3) 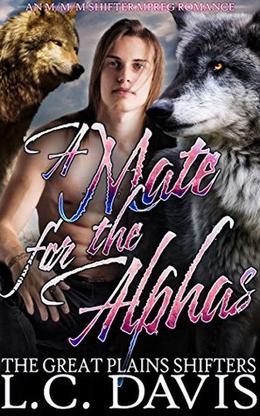 A lawless pack ruled by two mated Alphas, an omega who lives by the book, and a bond that will either bond them forever or break them for good.

Alphas aren’t supposed to fall in love with Alphas, let alone mark them, but Jason and Kade have always done things their way. Their pack, their rules, their life.

One omega stands to change everything.

When a Tribunal agent who’s never heard of a day off comes sniffing around looking for a pregnant teenager who claimed sanctuary in Silver Rapids, the omega immediately lands on Jason’s bad side. Jason knows Betty is being framed for the murder of her baby’s father, but Clyde’s insistence on following the letter of the law puts their pack sovereignty at risk.
Jason wants him gone. The only problem? He’s Kade’s destined mate.

As the murder investigation unravels, revealing high-level corruption in the Federation Jason turned his back on years ago, the Alphas and Clyde are forced to cooperate. When Clyde offers them the chance to start the family they’ve always wanted, it seems too good to be true… Until Jason realizes that it’s going to take more than just a surrogacy agreement to make their family complete.

'A Mate for the Alphas' is tagged as:

Similar books to 'A Mate for the Alphas'

More books like 'A Mate for the Alphas'   ❯

Buy 'A Mate for the Alphas' from the following stores: