She Got A Thang For The Money & Power 2 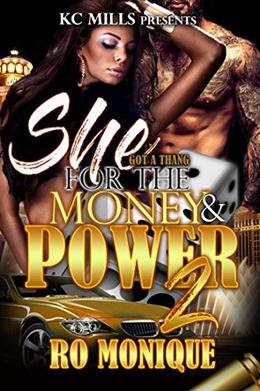 Ev and Cersai are furious with Dro and Beno and now it's time for some payback. In their heads they feel that the whole murder plan was a setup from the beginning after they saw Paul in the mall.
To them the plan was to take all four of them out not just Pia and Gia but somehow they managed to escape death's grasp and now it was time for some payback!
It's time for them to get the money and the power back into their hands that was stripped from them.
Payback! That's the only thing that is on Cee's mind as he hunts down Paul. In the midst of it he's going to learn something that he had no idea about and that he struggles with every day.
This part two is filled with twist and turns as you get to learn more about everyone's life outside of the drama.
Cersai is dealing with her own demons and secrets at home that pushes her away, but she has dreams of going back taking what's her.
Ev's family will face hard times as well and death hits home again testing her strength to keep going and living.

Will everyone be able to keep it together or will the dark cloud that has been covering them continue to loom over them?
more
Amazon Other stores
Bookmark  Rate:

Buy 'She Got A Thang For The Money & Power 2' from the following stores: