From The Ashes (Golden Falls Fire #3) 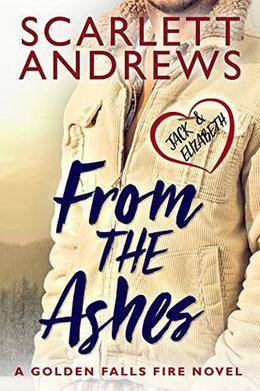 Handsome fire captain Jack Barnes gave up hope of finding love long ago. He keeps busy leading his crew of firefighters at Station One in the small city of Golden Falls, Alaska, and riding his beloved horse, Honest Abe. He tells himself that’s enough, but he hand-built a house fit for a family and his heart yearns for the love of a good woman.

Leave it to Jack to fall for the one woman he can’t have.

Elizabeth Armstrong wants more out of life than to just be known as the daughter of the town’s most notorious corrupt cop. Barely making ends meet as a bartender at the Sled Dog Brewery, she has dreams of becoming a nurse, wife, and mother. To create the family she never had and to fill her house with love, laughter, and the smell of baking bread. When sexy, kind fire captain Jack Barnes helps her out of a bad spot one night, she falls hard … but dare she hope that the sparks flying between them could ignite into true love?

Unbeknownst to Elizabeth, Jack is harboring a secret that destroyed her family in an attempt to save his own. Despite the heat between them, he feels honor-bound to keep his desire for her at bay, but secrets have a way of surfacing. When Jack reveals the truth about the past, Elizabeth must either forgive him, or walk away from the one man who can give her the happiness she deserves.

FROM THE ASHES is the third in the Golden Falls Fire series of contemporary romances. While it can be enjoyed as a stand-alone novel, there are plenty more love stories for the Golden Falls firefighters, so check out the other books in the series!
more
Amazon Other stores
Bookmark  Rate:

'From The Ashes' is tagged as:

Similar books to 'From The Ashes'

Buy 'From The Ashes' from the following stores: