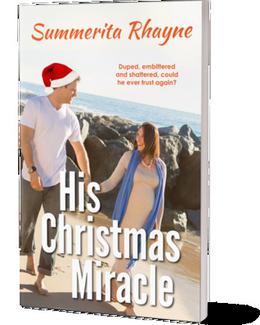 Kyle Masson's marriage has been a sham. Now after two years of apparent happiness, all he's left with, is a surrogate mother, pregnant with his child. Determined to at least be a proper father, he is ready to care for her throughout her pregnancy. But his experience has left him suspicious. Duped by one woman, he's determined not to let Chrissie out of his sight. So, when she plans a trip to India without his knowledge, Kyle follows hot on her heels.
Chrissie feels oppressed by her situation. Kyle's heavy-handed tactics are driving her mad and to complicate matters even further, she's seriously attracted to him. Surely she can't be drawn to a man this bossy? And then as she gets to know him, an insidious, impossible dream begins. That her baby should have both parents.
As compelling attraction drives them together, that wistful yearning appears to take on a hazy form.
But Chrissie knows her dreams are poised to be shattered. For she is bound to be only a surrogate, never a real mum.

'His Christmas Miracle' is tagged as:

Similar books to 'His Christmas Miracle'

Buy 'His Christmas Miracle' from the following stores: