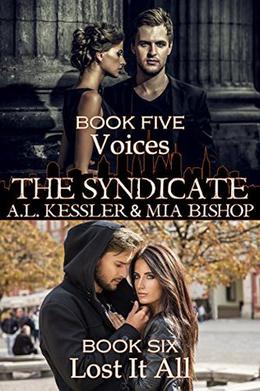 Two Novellas in the Syndicate Series

Voices By A.L. Kessler
Alika dedicated his life to the Syndicate when the Agency destroyed everything he held dear. When he discovers that the Agency holds an asset in the form of a medium turned vampire, he sees it as a chance to take one of the most valuable assets they have. Except Lisa is a newly turned vampire with no control and an addiction to a demi-god’s blood. His plans to rescue and dump her gets derailed as he realizes there is more to life than just the Syndicate.

As a new vampire, isolation is all Lisa knows, that and the cruelty of her handler. When Alika rescues her from the Agency, Lisa has to learn to trust this handsome stranger. Bloodlust, ghosts, and the past test her as they struggle to find a place where Lisa belongs in the paranormal world.

Lost it All by Mia Bishop
Samuel Jinn has secrets. He’s a creature that is loathed by both humans and paranormals alike. He is more important to his tribe than he wants to admit. And he fell in love the moment he saw a picture of the mysterious woman he’s sent to help.

Malia Rhea never thought her life would end with her being locked in a shipping container. But she finds herself the surrogate mother to an orphaned child while facing a horrible fate, until a handsome man comes to save them. Samuel might be just as dangerous as what fate had in store for her, or maybe he is what fate wanted all along. Fate and a demigod.

With time running out for the child, Malia’s reckless action might cost both of them more than they ever imagined.
more
Amazon Other stores
Bookmark  Rate:

The 'The Syndicate' series

Similar books to 'Voices / Lost it All'

All books by A.L. Kessler  ❯

Buy 'Voices / Lost it All' from the following stores: