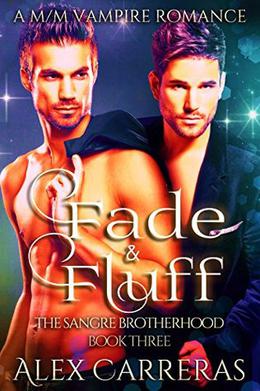 Jerrod Zaman, vampire and hairdresser extraordinaire, settled in Sangre, Florida to forget about his past, but Kairon who owns the barbershop across from Jerrod’s salon refuses to let him.

Kairon Brody still loves his ex and would love to rekindle their on-again-off-again relationship, which is a problem since his ex does not feel the same way. Kairon wants to convince Jerrod that they should get back together before possibly losing his eternal life at the hands of Alderman, a vindictive vampire who, with Jerrod’s help, Kairon thought he’d killed months earlier.

Sounds complicated? It is. But between breaking and entering, dodging vampires with murder on the mind, and a family member doubling as a flaming shish kabob, Jerrod and Kairon manage to see through a murky past to a bright future together . . . maybe.

'Fade & Fluff: A M/M Vampire Romance' is tagged as:

The 'The Sangre Brotherhood' series