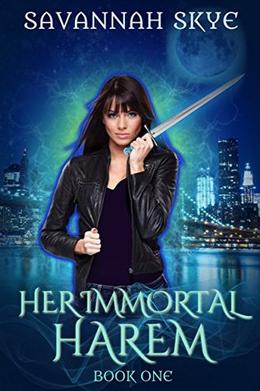 A good con artist has to be flexible, able to think on her feet, and ideally, have nine lives. That’s why I make sure I’m always the cat and never the mouse. Until now, that is…
I’m walking down the street minding my own business—okay, fine, running down the street with a fat guy named Hank chasing me after a hustle gone wrong—and suddenly, I get pelted in the back of the head by a frog.
You read that right. Frog. Like…ribbit.
Trust me, I was as shocked as you are. And that amphibian-sniping was just the opener to a major shit-show starring your’s truly as a modern day Joan of Arc and three sexy-as-hell demigods insisting that it’s up to me to save the world from the gods of old who want to see Earth razed and human kind wiped out.
What’s a girl to do besides saddle up and try to make this quest her bitch?

WARNING: THIS NOVEL ENDS IN A CLIFFHANGER, WHICH WILL BE RESOLVED IN BOOK TWO, NOW AVAILABLE FOR PRE-ORDER
more
Amazon Other stores
Bookmark  Rate:

'Her Immortal Harem Book One: Apocalyptic Reverse Harem Fantasy Series' is tagged as:

All books by Savannah Skye  ❯