Treasures of Skye (Women of Honor #2) 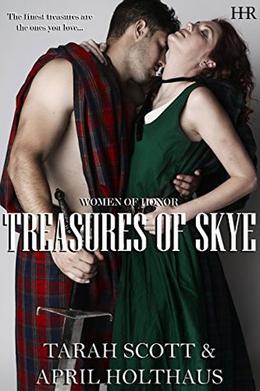 Women of Honor Mini-Series
Over the years, many lasses have found refuge in the Scottish Highland’s Glenwood Abbey. But for three young ladies, sanctuary becomes servitude, with master puppeteer Malcom Donald using them in his plan to rule the Isle of Skye.
A fourth woman, noble by birth, might just be their savior.

Treasures of Skye
For years, master thief Helena Donald has lived at Glenwood Abbey and submitted to Malcolm Donald’s bidding. Desperate to break free of his control, Helena agrees to steal the MacLeod Faire Flag for Malcolm for she intends to sell the flag and start a new life far from Malcolm. When Helena is caught in a blizzard, she prefers to die in the cold wasteland rather than return to the abbey.

Kaden MacLeod has chosen a solitary life in a cabin on the shore of Loch Haven. But a woman’s scream during a raging snowstorm sends him racing to rescue Helena from the frigid waters of the frozen loch. When he learns that this beautiful young woman is about to commit the same crime for which his father, Laird MacLeod, hung Kaden’s younger brother, he’ll stop at nothing to prevent her from facing a similar fate.

'Treasures of Skye' is tagged as:

The 'Women of Honor' series

Similar books to 'Treasures of Skye'

Buy 'Treasures of Skye' from the following stores: