Brother Of The Dark Places 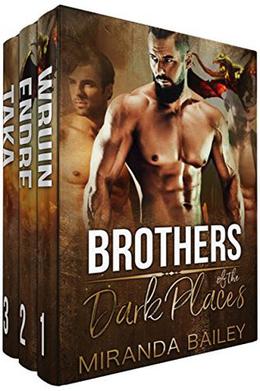 Brothers Of The Dark Places - The Complete Series

Wruin
Abigail lost everything overnight, including her identity!

The day Abigail finally has the courage to stand up for herself… she loses her job and the one person closest to her heart, her mother!

Despite her loss, she discovers the hidden truth about her family that leads to a dangerous journey away from West Virginia, to a new future ahead of her in England… to Wruin, a gorgeous man that Abigail is drawn to, even though she knows nothing about him and his ability to shift into a dragon.

Endre
The Dark Places are ruled by Dragons and this Dragon has found his mate. Endre continues the Brothers in the Dark Places series and he's bringing more surprises with him. Exiled to a life of solitude, this brother flies alone, but not for long. A human woman in need, a land in turmoil, and an evil as old as time changes the life of this lone dragon, but will the woman that is his life-mate stay, or will she run from the unknown?

Taka
The taker in the old tongue, a king in his own dark place. He’s spent his life ruling his people peacefully, but now it’s all at stake. Earthquakes have destroyed his land, and now he must seek shelter for his people in a frozen desert with his brother. When an old enemy resurfaces, Taka does what he must, and fights to save his people. All he wants is her, though. He wants to live up to his name and take her to be his own. If he can make her see that she is his mate and there’s no running from the soul-mating.


Included in this box set is the story of Riever: A Memory From the Dark Places. This story will only be found in this box set, so get it now!
more
Amazon Other stores
Bookmark  Rate:

'Brother Of The Dark Places' is tagged as:

Similar books to 'Brother Of The Dark Places'

More books like 'Brother Of The Dark Places'   ❯

Buy 'Brother Of The Dark Places' from the following stores: