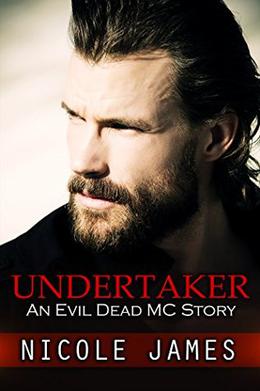 When Undertaker saved an innocent young girl from the clutches of a rival MC, he never expected she’d form an attachment to him, refusing to leave the safety of his clubhouse. But the President of the Evil Dead MC has a club to run. What he doesn’t have is the time or the experience to help Holly get past the traumatic experience she’s been through. Counseling is what she needs, and he’ll see she gets it.
The last thing Undertaker expects to see when that therapist walks through his clubhouse doors is a face from his past. They’d met years ago when he’d been ordered into counseling as part of his parole. Eleven years locked in a cell does things to a man, but back then Undertaker hadn’t had time to deal with all his demons. He had a motorcycle club he needed to get back to, and an untimely death in the ranks had him stepping up to fill the spot of President and fulfill his destiny—one that didn’t include the fresh-out-of-college psychology intern who’d been put in charge of his case. She’d known nothing of his problems. How could she?
Besides, he’d scared her to death.
Now, a dozen years later, fate was coming around again, throwing them back together. But Allison Carter wasn’t that naïve girl anymore; she was all woman now.
And the President of the Evil Dead’s New Orleans Chapter was about to make her his.
Only problem was he had to let one sweet girl down easy before he could pursue her hot-as-sin therapist.
It won’t be so simple when trouble from his past threatens everything.
When an ex-con biker sets his sights on you, do you run?
No?
Not even when he comes with more trouble than you can handle?
more
Amazon Other stores
Bookmark  Rate:

'UNDERTAKER: An Evil Dead MC Story' is tagged as: