Army Ranger with Benefits (The Men of At Ease Ranch #4) 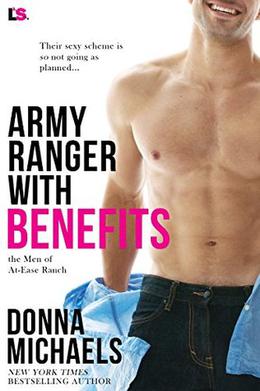 Emma Roberts is done losing her heart to military men who don’t stick around. Desperate to shake up her love life, she launches a plan to get her handsome, dependable crush to finally notice her. And her neighbor’s sexy older brother that just arrived in town is the perfect man for the job.

But there’s a problem. Emma’s ridiculously attracted to her fake boyfriend.

Former Army Ranger Vince Acardi dropped everything to help his stubborn brother after he’s injured in the line of duty. Instead, he somehow gets stuck helping the adorably hot girl next door land a date with some doctor she’s interested in. Not that fake-dating her is a hardship, and soon, he’s holding her, kissing her, touching her...

There’s nothing fake about the chemistry between them. But Vince is leaving in two weeks, and Emma refuses to risk her heart on another military man. Worse, the good doctor she’s been after is finally standing up and taking notice...

Each book in the Men of at Ease Ranch series is STANDALONE:
* In a Ranger’s Arms
* Her Secret Ranger
* The Right Ranger
* Army Ranger with Benefits

The 'The Men of At Ease Ranch' series

Buy 'Army Ranger with Benefits' from the following stores: