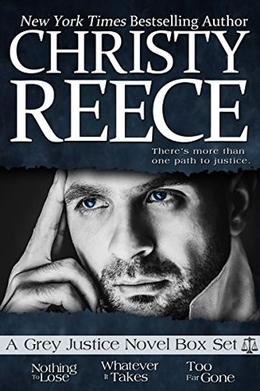 NOTHING TO LOSE, A Grey Justice Novel

Choices Are Easy When You Have Nothing Left To Lose

Kennedy O'Connell had all the happiness she'd ever dreamed--until someone stole it away. Now on the run for her life, she has a choice to make--disappear forever or make those responsible pay. Her choice is easy.

Two men want to help her, each with their own agenda.

Detective Nick Gallagher is accustomed to pursuing killers within the law. Targeted for death, his life turned inside out, Nick vows to bring down those responsible, no matter the cost. But the beautiful and innocent Kennedy O'Connell brings out every protective instinct. Putting aside his own need for vengeance, he'll do whatever is necessary to keep her safe and help her achieve her goals.

Billionaire philanthropist Grey Justice has a mission, too. Dubbed the 'White Knight' of those in need of a champion, few people are aware of his dark side. Having seen and experienced injustice--Grey knows its bitter taste. Gaining justice for those who have been wronged is a small price to pay for a man's humanity.

With the help of a surprising accomplice, the three embark on a dangerous game of cat and mouse. The stage is set, the players are ready...the game is on. But someone is playing with another set of rules and survivors are not an option.

WHATEVER IT TAKES, A Grey Justice Novel

To Save His Family, She May Be His Only Hope

Working for the shadowy division of the Grey Justice Group is the perfect job for Kathleen Callahan. Wealthy businessman Eli Slater is the only man to penetrate her implacable defenses and she fights to resist him at every turn.

Eli Slater has worked hard to overcome his family's past and repair the damage they caused. A new light comes into his life in the form of security specialist Kathleen Callahan. Even though she rejects him and everything he makes her feel, Eli is relentless in his pursuit, determined to make her his own.

Darkness has a way of finding and destroying light and Eli learns his family's troubles are far from over. Dealing with threats and attempts on his own life is one thing, but when those he loves are threatened, it's a whole new game. And he'll stop at nothing to win.

But evil has a familiar face, along with an unimaginable goal of destruction, putting both Eli and Kathleen in the crosshairs and threatening the happiness they never believed they'd find.

Some Obsessions Can Be Deadly

Gabriella Mendoza has lived her life in seclusion. Guarded by the most corrupt men in the world, she has no chance for escape until an unexpected meeting with the mysterious Grey Justice Group changes everything. Gabriella is free for the first time in her life, but is that freedom all a lie?

Vengeance is Jonah Slater's only purpose. Finding the man who killed his fiancée and making him pay is his only goal. Babysitting the pampered princess of a crime boss is not part of his agenda. But the more he gets to know Gabriella, the more he realizes that protecting her might be the most worthwhile thing he's ever done.

They thought they knew the threats, believed they were contained. Jonah and Gabriella soon learn that evil has varying degrees and many faces. And very often, the deadliest is the one you never see coming.
more
Bookmark Rate Book
Amazon Other stores