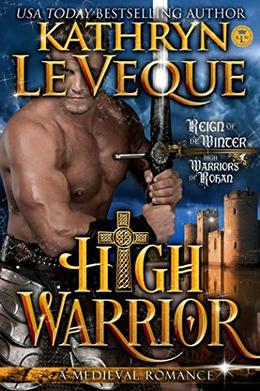 A big Irish knight, much beloved by his English men, faces his biggest challenge when an injury nearly claims his life… and his confidence as a warrior.

The man known as the “High Warrior” is an Irish knight with an English overlord. Sir Bric MacRohan serves the House of de Winter in the dark times following the Anarchy.

Once the most aggressive, all-powerful knight in the realm, a great injury forces Bric to realize that he is, indeed, mortal. Though he recovers from the injury, it changes how he commands his men and how he handles himself in battle. Mentally, his is far more injured than he is, physically.

Enter Lady Ellison “Ellie” de Gael. The daughter of a bastard of the Earls of East Anglia, Ellison is used as a pawn by her ambitious father to secure an alliance with de Winter. She is forced to marry de Winter’s greatest knight in an unhappy circumstance.

But what she never expected was how much she would come to love him.

When the greatest swordsman that England has ever seen lays down his weapon due to battle fatigue, it’s up to Ellison and those who love Bric to help the man regain his confidence as a warrior, and to once again do what he was born to do. Men like Christopher de Lohr... David de Lohr... Juston de Royans... and many more recognizable knights from Le Veque's Medieval world all pull together to help Bric recover what he has lost... himself.

Medieval Romance has never been so emotional – or so romantic – as Bric and Ellison discover the true power of their love.

(Note: This book is also related to the House of de Winter series and includes characters from the de Lohr Dynasty and Lords of de Royans series).
more
Amazon Other stores
Bookmark  Rate:

'High Warrior' is tagged as:

The 'High Warriors of Rohan' series