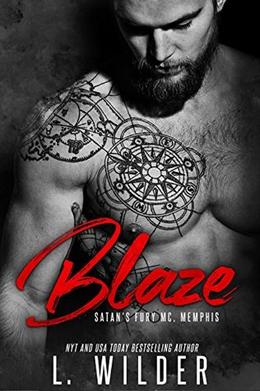 She was the light to my darkness.

New York Times and USA Today Best Seller L. Wilder brings readers a new Satan's Fury series that is guaranteed to keep you on the edge of your seat.

Blaze:
In Memphis, Tennessee, Satan's Fury MC had become the most notorious MC in the city. That recognition hadn't come easy. While people were visiting Graceland and walking down on Beale Street, my brothers and I were at war, fighting rival MCs and gangs who were trying to take control of our territory.

We had staked our claim, but when a new threat arrived, everything we had worked for would be put in jeopardy.

Kenadee Brooks was a nurse, trying to save lives and make a difference in the world. The moment I saw her, it wasn't just her beauty that caught my eye. It was the light that burned deep inside of her that drew me in. I longed for it, and with each moment I spent with her, the more determined I became to make her mine.

But when she was pulled into my world, saw the life that I lived, would that light I craved still burn bright or would it disappear forever?


Blaze is book one of the Satan's Fury MC- Memphis Chapter. This full-length standalone novel is intended for mature audiences only due to the explicit language and violence. Contains no cheating and a swoon-worthy HEA.
more
Amazon Other stores
Bookmark  Rate:

'Blaze' is tagged as:

All books by L. Wilder  ❯

Buy 'Blaze' from the following stores: