Theirs to Pleasure: a Reverse Harem Romance 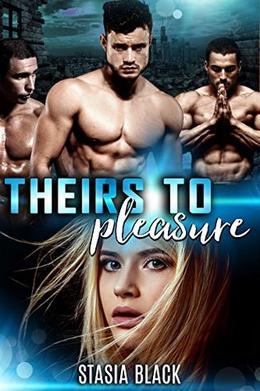 In a world where there’s only one woman for every twelve men, a lottery is the chance for five lucky men to win the prize of a lifetime… her hand in marriage.

Shay bringing meals to his cell a few times a week is the only bright spot in the sh%t show that has become Charlie’s existence after being captured by the enemy.
He can’t stop thinking about her.
The barest brush of fingertips as she passes him his tray through the slot in the door.
How she looks up at him through her eyelashes with those gorgeous, haunting green eyes of hers.
Where did she come from?
Who the hell is giving her those bruises on her face?
And more importantly, how can Charlie protect her when he himself is locked up like an animal?

But then one day, Shay’s saves him.
She breaks him out of prison and says she knows where Charlie’s sister is—the sister Charlie was afraid was dead.
As soon as Charlie’s free, he makes a vow.
He’ll protect Shay at all costs, even if it means his life.

There’s just one little problem.
The township where his sister lives?
Turns out they have a law that every woman must marry five men.
And His. Sister. Married. Five. Guys.

Even worse? Shay’s the next up for the lottery.


For a limited time only, enjoy included bonus content (Theirs to Pleasure is 300 pgs and ends around the 41% mark).

Please also note that this book contains some dark elements and covers some sensitive topics. Any reader that feels they shouldn't venture in this apocalyptic world of sometimes harsh realities should please consider before reading.
more
Amazon Other stores
Bookmark  Rate:

'Theirs to Pleasure: a Reverse Harem Romance' is tagged as:

Similar books to 'Theirs to Pleasure: a Reverse Harem Romance'

More books like 'Theirs to Pleasure: a Reverse Harem Romance'   ❯

All books by Stasia Black  ❯

Buy 'Theirs to Pleasure: a Reverse Harem Romance' from the following stores: