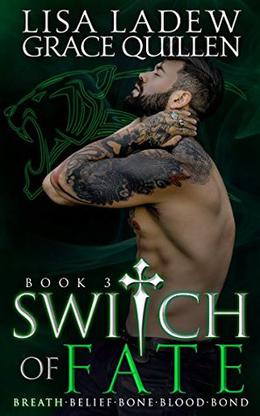 Riot Cofield is a bad-boy mountain lion shifter who scales mountains like fences. He belongs IN the Natahala Forest, but not TO it, and he resents “the Cause” because it turns normal, sweet women into a conniving, savage witches - switches - who will do anything to kill a vampire.

Riot tried out the Cause (after all, he is a shifter) but after getting used and discarded twice, he’s over it. Over and done with the Cause and everything in it, including Resperanza, the extraordinary, not-there-a-month-ago, magical house and command center. So he moved out, and oh yeah, he quit the Cause, too.

Until he has no choice but to step into a fight for a flagging switch he’s never seen before, throwing her his knife that she can’t seem to let go of. But the real kicker comes when she knows his name. It’s his secret high school crush, the only woman ever special enough to make Riot want to straighten out his renegade ways.

Gemma, the lost love of his life, is a switch?

“Love of his life” enough to move back into Resperanza? Maybe, but enough to support the Cause with everything he has? No. Never.

Then why is he delivering sweet, inquisitive, gorgeous, green-glowing Gemma to the one place he would never want her to belong?

And why does he get the feeling she’s about to blow the doors off this whole operation?
more
Bookmark Rate Book
Amazon Other stores

Similar books to 'Switch of Fate 3'

Buy 'Switch of Fate 3' from the following stores: