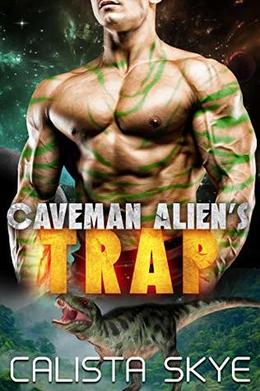 Caroline
I'm trapped.
Not just stranded on this lethal dinosaur planet. But actually trapped. As in, there's a crude net all around me and I can't move .
The guy who trapped me is right in front of me, just staring at me through the net like he's never seen a woman before .
Which he hasn't. The cavemen on this alien planet don't have women of their own.
So they like to abduct Earth girls and then get them pregnant .
And the way this guy is looking at me, I think that's exactly what he's planning .
But if that's what he thinks will happen, he'll be disappointed.
I'd rather die.

Xark'on
This is not what I thought I'd catch.
It's a woman. Even I can see that. She's round and smooth and small. And her scent is so alluring it makes my head spin.
My crotch swells uncontrollably at the sight of her. I've never felt anything like it.
I caught her, so I can do with her as I please .
And I know exactly what I'll do.


Caveman Alien's Trap is the fifth book in the Caveman Alien series of science fiction romance novels. The books are complete stories, but should be read in order for maximum enjoyment.

Expect steamy scenes, mysterious aliens with features like adult toys, deadly planets and the love story between a girl from Earth and a sensationally hot alien warrior.