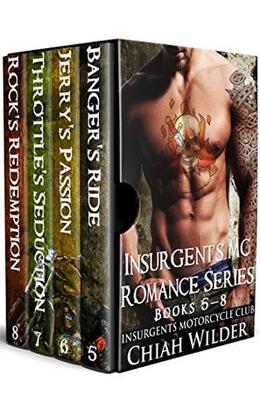 Banger, Insurgents MC President, isn’t looking for a woman to replace his beloved wife. Set in his ways, tough, tatted, and a no BS-type of man, Banger’s doing just fine until he meets the sassy single mom who cooks the best fried chicken he’s ever tasted. For the first time since he’s been widowed, he wants a woman in his life and warming his bed.

After finding out her husband was a cheating louse, the last thing Belle wants is another man. She has her hands full with her teenage daughter, paying the bills, and fending off accusations that she poisoned her husband. Then she meets Banger, the handsome, rugged biker who comes crashing into her life. If only he wasn’t so nice and didn’t get her all hot and bothered.

Once he decides on something he doesn’t let go, and he’s decided to make Belle his.

The first time Jerry saw Kylie he was taken by her, but stayed away because she was too young. A member of the Insurgents MC, Jerry’s life revolves around the club, his Harley, and easy sex. He has plenty of women, but his sights are set on the pretty, young blonde who is all grown up now—sweet curves and all.

As the president’s daughter, Kylie McDaniels grew up in the outlaw biker world, but her father kept her from the dark side of it, and she still has an innocence he prefers she keep. Banger has made it clear that she is off-limits to all bikers. Kylie would listen to her father, but the hot, muscular biker makes her want to do some not so innocent things.

Then a killer craving retribution has set his sights on Kylie. Will Jerry be able to stop the madman before he strikes?

Can their forbidden love survive the chaos of the world around them?

Throttle, Road Captain of the Insurgents Motorcycle Club, likes his women willing, stacked, and no strings attached. Then he meets Kimber, the new mechanic at Hawk’s bike shop. In his world, the only thing a woman should do on a Harley is spread her pretty legs wide.

She is sassy-mouthed, aggravating, and not his type at all. And he doesn’t need any woman—let alone a chick in mechanic coveralls—messing with his head.

Kimber has had to fight to be accepted in a man’s world. Swearing off all bikers since her last boyfriend made her his punching bag, she’s content with working on Harleys and being alone.

When she meets Throttle sparks fly. He’s a cocky, chauvinistic bastard. He’s also incredibly handsome, built, and sexy as all hell. He’s exactly her type. She should run far away from him, but her body wants him in the worst way.

As Throttle and Kimber play tug of war, a Peeping Tom spots Kimber Descourts and is drawn to her. And he’s beginning to grow bored of just watching.

Will Kimber trust Throttle enough to let him help her?

Rock, Sergeant-At-Arms for the Insurgents MC, has only been in love once—a long time ago—and the end result was shattering. He learned his lesson: keep his heart encased in steel.

Once he joined the Insurgents MC, he vowed to leave the past in Louisiana. He embraces his life of booze, easy women, and Harleys. Then his past crashes into his life when he spots the one woman who has ever captured and crushed his heart—Clotille.