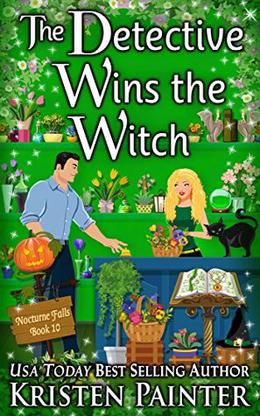 Welcome to Nocturne Falls, the town that celebrates Halloween 365 days a year. The tourists think it's all a show: the vampires, the werewolves, the witches, the occasional gargoyle flying through the sky. But the supernaturals populating the town know better.

Living in Nocturne Falls means being yourself. Fangs, fur, and all.

Private investigator Wyatt West finds his job a little tedious most days, but that changes when he meets a bewitching blonde florist who needs a favor in the way of a wedding date. There's definitely something magical about her, but little does he know just how correct that first impression is.

Single mom Marigold Williams finds herself instantly attracted to Wyatt, but doesn't dare tell this handsome human that she's a witch and things in Nocturne Falls are a little spookier than he suspects. He’s just a nice guy who’s offered to be her plus one. She doesn’t need to turn his world upside down with the truth over one date.

Despite that agreement, their feelings deepen and both agree to try a relationship beyond their current temporary arrangement. Now Marigold must tell him about her witchy side. After all, he has a right to know who he’s dating.

But when Wyatt unwittingly frees some dangerous magic, Marigold knows a life changing sacrifice is the only way to set things right. Will her magic save him? And will he be able to handle the truth that comes with it?
more
Bookmark Rate Book
Amazon Other stores

Similar books to 'The Detective Wins The Witch'

More books like 'The Detective Wins The Witch'   ❯

Buy 'The Detective Wins The Witch' from the following stores: