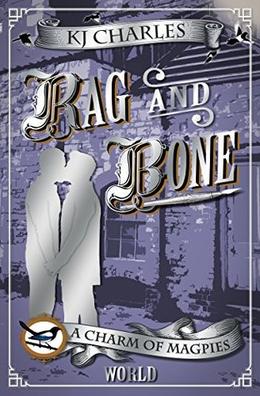 It’s amazing what people throw away…

Crispin Tredarloe never meant to become a warlock. Freed from his treacherous master, he’s learning how to use his magical powers the right way. But it’s brutally hard work. Not everyone believes he’s a reformed character, and the strain is putting unbearable pressure on his secret relationship with waste-man Ned Hall.

Ned’s sick of magic. Sick of the trouble it brings, sick of its dangerous grip on Crispin and the miserable look it puts in his eyes, and sick of being afraid that a gentleman magician won’t want a street paper-seller forever—or even for much longer.

But something is stirring among London’s forgotten discards. An ancient evil is waking up and seeking its freedom. And when wild magic hits the rag-and-bottle shop where Ned lives, a panicking Crispin falls back onto bad habits. The embattled lovers must find a way to work together—or London could go up in flames.

This story is set in the world of the Charm of Magpies.
more
Amazon Other stores
Bookmark  Rate:

'Rag and Bone' is tagged as:

Similar books to 'Rag and Bone'

All books by K.J. Charles  ❯

Buy 'Rag and Bone' from the following stores: