The Last Day Of Summer 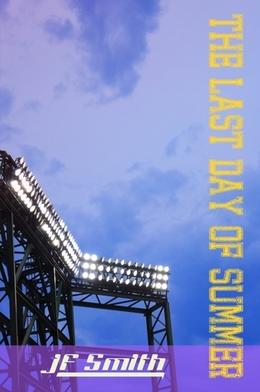 Rett’s done some running away in his life, from family and from boyfriends, and he’s not above doing it again. His current boyfriend wants to take their relationship to the next level, which makes Rett hesitant and doubtful. Luckily, a job offer in a new town solves his problem for him, giving him the perfect excuse to run away yet again from the uncomfortable feeling of someone trying to get close to him, even if it means picking up after seven years of school and starting over.

Most guys would kill for his new job, and Rett’s certainly desperate for the paycheck. But the irony of the new position isn’t lost on him — he’s never cared a whole lot for sports, and even far less about the world of professional sports, which is right where he’s landed. Then he finds out he’s not the only one that’s new to pro sports, and he gets closer and closer to one of the players as they try to make sense of the whole crazy thing together. And things seem good!

But when his family, whom he had long since left behind, shows back up with a family crisis, his life starts to unwind and Rett allows everything around him to painfully self-destruct. It’s only then that he realizes he’s got to get back up, stand his ground, and teach himself the one thing he never truly learned growing up.

He’s got to stop running away and finally learn what it really means to be a man.
more
Amazon Other stores
Bookmark  Rate:

'The Last Day Of Summer' is tagged as:

Similar books to 'The Last Day Of Summer'

More books like 'The Last Day Of Summer'   ❯

Buy 'The Last Day Of Summer' from the following stores: