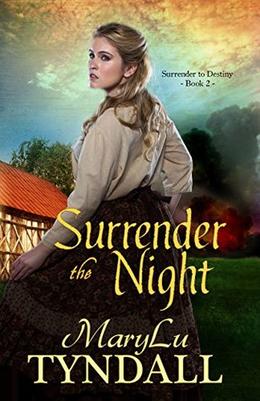 Tyndall writes with such vivid detail readers will feel a part of the action and romance as they experience a historical event they won't soon forget. Romantic Times Book Reviews

A timid American farm girl at the mercy of the enemy. . .
A wounded British sailor driven into hiding. . .
Both are about to change the course of history forever.

When British soldiers invade Baltimore amid the War of 1812, Rose McGuire, alone on her family farm, is easy prey for a brutal lieutenant. In the midst of the attack, she’s saved by British 2nd Lieutenant Alexander Reed. Owing him her life, she is forced to heal and hide an enemy soldier.

Alex hadn’t meant to kill his superior, nor get shot in the process. Now badly wounded, he’s at the mercy of this rustic American girl who obviously hates him. Can he trust her or will she turn him over to the Americans?

Rose is having trouble keeping Alex hidden from her family, the townspeople, and the man intent on courting her, who continues to snoop around. If he discovers Alex, the price of his silence would be her hand in marriage.

Things only get worse when the British are on the move again. This time, their target is Washington DC. Will these young lovers at heart find themselves enemies at war?

Once again this author has made a story to treasure.It is a MUST READ and a keeper. April Renn, My Book Addiction

NOTE TO READER : This is a reprint of the original Surrender the Night published in 2011
more
Amazon Other stores
Bookmark  Rate:

'Surrender the Night' is tagged as:

Similar books to 'Surrender the Night'

All books by MaryLu Tyndall  ❯

Buy 'Surrender the Night' from the following stores: